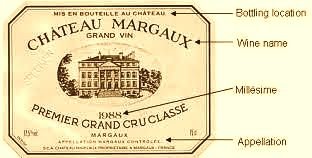 
Simple rule by appellation stated again:   American wines are principally controlled  by varietal name whereas European wines by their place of origin or appellation. This means that American wines, by way of example,  marketed with the name of a varietal, like chardonnay,  minimally have to have 75% of that varietal in the bottle.    European wines tell you where the wine is from prominently on the label and must meet all the rules of that location.  These rules are less strict the more general the appellation.  The "older" and more experienced that, for example California, becomes with the fact that the same grape grown different locations produce different flavors, the more with time these generalizations mute over time.  You can refer to my blog comments about this very issue.

Sticking with chardonnnay from Puligny-Monrachet in Burgundy mentioned in the preceding web page, there is also the classification of wines from that region into hierachies of different levels based on the actual vineyards: Premier Grand Crus, Seconds Grands Crus and Troisiemes Grands Crus.  There is a hierarchy institutionalized into law for how good the wine is.  No such thing exists in the New World.  The New World is, as I say, a marketer's dream.

Let's use the example of Puligny-Montrachet, Troisiemes Grand Cru, Le Champ Canet.  Understand that the wine could pretend to any of these appellations I am about to give but unless there is some flaw that makes it necessary to have a lower appellation, for economic reasons you would obviously take the higher to which you are entitled.  The difference in price is enormous.Say you are a person who made a wine from Le Champ Canet and you made a little more than that very specific appellation allows?  You would have to sell the excess to be part of a more generic Meursault blend.   With a New World Winery, to play with over production you play with your reputation; the Old World seems to follow a different route hoping to let it not reach that level because once someone transgresses against the appellation, it is no longer a game involving just their personal wine.

White Wines  Acidity and Alcohol
(Higher levels of either, especially acidity, tends to aid longevity)  High alcohol wines that are young, highly fruity and low in acids (due to either special fermentations that lower acids such as malolactic fermentation or not being fermented to dryness leaving behind fruit sugars) are the young wines the modern public seems to prefer. These wines are more difficult to store than wines which are higher in acids.
On the chart below, "H" signifies higher, "M" is medium and "L" tends to lower: remember...these are broad, relative generalizations.
For alcohol, typically Low = 9 - 11% , Medium = 11 - 12.5% and High = 12.5 - 14%

I. The Family of Wines Based Upon Chardonnay Grapes  to be continued..........